Learn how Cookie the Cop came into existence and eventually the focal point of the Cook’s Pest Control brand.

Cook’s most enduring – and endearing – marketing idea was born not to influence adults, but to please children. In 1965, WAAY-TV in Huntsville, Alabama, proposed that the area Cook’s office sponsor a children’s television program. During the 1960s, many local TV stations produced their own live weekday afternoon shows. Each program was as unique as the community it served, though most followed the same format. The host might be a cowboy, clown, princess, astronaut, or other costumed character. The studio audience consisted of schoolchildren who enjoyed cartoons and participated in fun games, songs, and adventuresome stories.

Since Cook’s employee Jim Kearney was already an experienced master of ceremonies for children’s events in the community, the station proposed that Cook’s co-sponsor a kiddie show for free if Kearney would host it. The television station suggested a clown character, but knowing the Golden Flake (potato chips) clown was already a well-recognized mascot, John Cook Sr. suggested a Keystone Cop-style policeman. He could be comical and friendly, but would also represent the idea of protection, personifying Cook’s objective of protecting health and property. John named him “Cookie the Cop.”

John and Jim collected the bits and pieces needed to make an old-fashioned policeman’s uniform including a British bobby’s hat, spats, a billy club, and a shiny metal whistle. Cookie the Cop was a smash hit on Huntsville TV! He drove around town after school in a van decorated like a paddy wagon with black tape “bars” on the windows and Cookie the Cop signs all over it. With their parents’ permission, children rode to the television station in the paddy wagon.

Cookie the Cop spurred John to re-evaluate the company’s original logo, which was a drawing of a pest control technician holding a B&G spray can with “Cook’s Pest Control” in the cloud of spray. At a University of Illinois management conference, an advertising professor suggested John have a graphic artist further develop the Keystone Cop idea.

John contracted with Al Hollis, an advertising consultant in Birmingham, to draw a new and improved Cookie the Cop sporting a yellow star with the words “Cook’s Pest Patrol,” which was then registered as a protected trademark.

Dan Moreland, publisher of Pest Control Technology magazine, considered Cookie one of the best logos in the industry. “John’s branding is great,” he said. “Cookie is a terrific logo because it’s memorable and yet comical and approachable. It’s a symbol of security. It was a brilliant idea.” 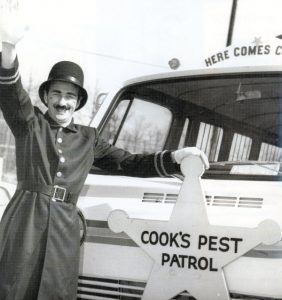