Mouse Versus Rat
Many people refer to mice and rats as “the same thing,” when in reality, they are anything but.
Mice and rats and distinctly different in both appearance and behavior. Control efforts vary depending on whether you have an infestation of mice or rats. The three pest rodents that we deal with are the house mouse, Norway rat, and roof rat.

Telling the difference – visually
If you’ve been to a pet store, then you’ve unknowingly seen both house mice and Norway rats. They’re marketed as fancy mice and fancy rats, respectively, with the word fancy meaning that it was bred for a particular appearance. They are also used extensively as laboratory animals. As a society, we don’t really breed roof rats for companionship or for science, so you might not have seen a roof rat unless you caught one in your attic.

Mice and rats share many similarities. In general, the body color is a shade of brown, gray, or black with a lighter colored belly. They have naked (furless) feet, tails, and ears.
Visually, the house mouse is considerably smaller than a rat. While length can vary, a large mouse might be around eight inches (with tail included) and weigh around 1 ½ ounces. The head and ears are large relative to its body and the snout is pointed. The fecal pellets are about ¼ inch long with pointed ends.

The roof rat is a bit longer. It is a slender rat with an overall body and tail length of around 15 inches and can weigh up to 8 ounces. The tail of the roof rat is longer than the head and body combined, and the ears can be pulled over the eyes. The fecal pellets are about ½ inch long with pointed ends.

The Norway rat is the biggest of the three with a stocky body and blunt snout. It can get as long as 20 inches with the tail included and weigh as much as 16 ounces, twice the weight of a roof rat. The tail is shorter than the length of the head and body combined and is a key character in distinguishing it from the roof rat. The ears are relatively small compared to the head and do not reach the eyes when pulled over. The fecal pellets are about ¾ inch long with rounded ends. 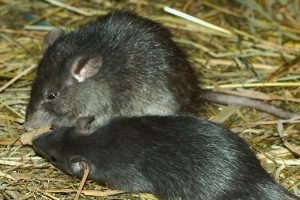 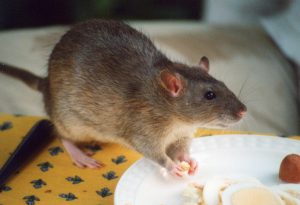 Telling the difference – behaviorally
Mice are more curious than rats. Put something new in a mouse’s territory or runway, and the mouse is likely to investigate it. If you’re putting out a trap, that’s a good thing, as mice won’t hesitate or shy away from unfamiliar things. Rats, on the other hand, are cautious and afraid of new things. Rats may even alter their routes if something new is put in their path. You might need to put out an un-set trap for a couple of days so that rats can become acclimated to it before you finally set the trap.
The house mouse doesn’t travel very far from its home. They’ll travel about 10 to 30 feet. The Norway rat is willing to go further, around 40 to 100 feet, but rarely exceeding that. The roof rat travels the furthest, anywhere from 100 to 300 feet, and may be living at one residence while feeding at another.

It’s rare to see more than one pest rodent infesting a house. Mice are afraid of rats, as rats will eat mice. Norway rats are bigger and more aggressive than roof rats and outcompete roof rats for food and territory. While the Norway rat is an accomplished climber, it prefers to be down low, making its home in burrows and other ground-level places. The roof rat, as its name suggests, is more at home up high, making its home in trees, vine-covered fences, and attics.
Rats require a daily source of free-standing water while mice obtain most of their water from the food they eat. Therefore, removing water sources or using liquid baits may not be as effective for mouse control.

While there is some overlap between what these three pest rodents will eat, they each have their own food preferences. House mice prefer grains, roof rats prefer fruits and nuts, while Norway rats prefer meats and are partial to dog food. They are all true omnivores, though, and will eat just about anything to survive. A house mouse will feed on cockroaches, a roof rat will feed on condiment packets, and a Norway rat will eat bird seed, so don’t limit your identification based solely on what’s being eaten.

Why does it matter?
The first step in any control program is figuring out what you’re dealing with – identifying the pest. This can be achieved by seeing a live or dead animal or evidence of the animal in the form of tracks, damage, droppings, or burrows and nests. A control effort might be rendered completely ineffective if you’re trying to catch something in a place that it doesn’t travel. For example, it’s important to know if you have a roof rat versus a Norway rat – if you place a trap in a corner, a roof rat traveling by pipes and plumbing may never touch the floor and never encounter the trap.